(This is a little teaser from the first chapter of my "soon-to-be-self-published-because-I-don't-make-enough-money-for-certain-publishers" book, Fiberglass Clown Head Symphony.  Look for it at a fine bookseller near you.  Actually, don't look for it at any booksellers, except possibly and hopefully at Trail's End Books of Winthrop, Washington, as they are about the only store in all creation wise enough to stock decent literature.  Hey, honestly, I'm down and cool with the whole capitalism thing, and I know publishing is about making money - who doesn't love a little extra fifty in the pocket?  Perhaps the manuscript got turned down because it is lousy, or maybe it really was about sales of the previous book.  "Hit me, but don't shit me," as my dear, late father used to say. Okay, perhaps I am going a bit overboard here, but whatever the case, please enjoy this little nugget...) 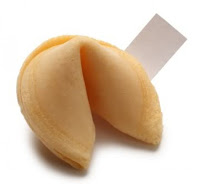 Michael picked up the package and turned it over in his hand. The cookies appeared perfectly matched, golden and apparently crisp – just what you want out of a fortune cookie. He gently tore open the package and removed one of the cookies. As he had been doing for years, he placed the cookie in the palm of his left hand and slowly closed his fingers around it, applying pressure until he heard the crisp shell give way. A satisfying crack, and Michael opened his hand again to reveal a perfectly crushed cookie, its little fortune slip lying amidst the shards.


Michael retrieved the little slip and turned it over. “A wise man will make more opportunities than he finds. Lucky numbers 2, 5, 11.” He placed the fortune on the table and placed the cookie shards in his mouth one by one. They had a nice sweet flavor, somewhat reminiscent of almonds and perhaps a touch of orange or some other citrus flavor. He had been right in guessing the cookie to be crisp, for if it was nothing else, it was crisp. This seemed to be damning the cookie with faint praise, however.


"Damning with faint praise." That was a saying that Michael's mother used to trundle out quite a bit when she had still been healthy. Before the debilitating plaque deposits begin forming in her brain, she was quite the quick wit and original thinker. Even still, she would from time to time use the odd hackneyed or worn phrase, the over-used idiom. She would say things like “up the creek without a paddle,” “barking up the wrong tree,” “damning with faint praise,” and “pressing the shit button when you really need shinola.” Actually, this last phrase was one that no one but her ever seemed to use, but she would use it so often that you came to believe that it was a common saying. Michael would be with his parents at a party, a wedding reception, a formal dinner, or anything, and conversation would somehow wind its way to where his mother could drop this doozie. “Holy Mother of Pete,” his mother would say, “you were sure pressing the shit button when you really needed shinola.” People within earshot would sit up and take notice. His father would drop his head and blush, and mother would chuckle.


Shinola was a brand of wax shoe polish that presumably could be mistaken for human feces. By the time that Michael was an adult, people no longer wore leather shoes requiring any sort of upkeep such as polishing. Shoes were made entirely of plastics, nylons, and a synthetic meerschaum substitute, and when they became unsightly the owner simply rejuvenated them with an intravenous infusion of a product known as “helium sponge carbide”. This did nothing for the appearance of the shoes, but rendered the owner less vain. Ironically, Michael's father was a chemist who worked on the team that discovered “helium sponge carbide,” although they never saw the lowering of shoe-owner vanity as an application for their discovery. They were just searching for another synthetic meerschaum substitute.


The world is a crazy place.

Posted by martinipen at 9:37 AM No comments: