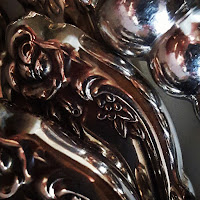 I stooped down to look at the tiny little spoon-made ringer that Johnny was offering to me, at first thinking that it was not worth my time.

“Check out da' lil' spoon-made ringy-dingy thing!” he had called out as he approached, walking down Kumquat Lane (a street you might remember from another tale about a most fortunate geometry teacher named Mr. Zoops. This tale, however, has nothing to do with that tale – or with Mr. Zoops. Or with geometry, for that matter).

Johnny was always offering me the strangest items, and he was always having songs written about him. That bothered him to no end, but he put up with it, just to humor the songwriters.

“Check out da' lil' spoon-made ringy-dingy thing!” he called again, crossing Peach-Compote Avenue (the Street Department of Weaverton was a fun-loving bunch). He failed to look both ways, and a truss-delivery van (there are lots of those in this neighborhood) came trundling through the intersection and knocked him to the ground. He held fast to the spoon-made ringer.

High up in the outer reaches of the atmosphere, a glimmering silver jet tore through the ether, leaving no mark along its path, yet for just a moment, both Johnny and I saw the sun catch its silvery skin. It seemed to wink at us like a firefly visible in broad daylight.

“I think the winking goddess Juno is pleased with my lil' spoon-made ringy-dingy thing,” Johnny said with what might prove to be one of his last breaths (depending on the speed with which the space-time continuum folds around us while I write), as he held the spoon-made ringer aloft.

I looked over my shoulder at the empty patch in the sky, now devoid of the glimmering silver jet, and then I stooped down to look at the tiny little spoon-made ringer that Johnny was offering to me, at first thinking that it was not worth my time.
Posted by martinipen at 9:23 AM